Cleaning out my cache.

Oh, hai!! This post is going to jump around quite a bit b/c I just organized my "Foodz" picture folder and uploaded a few new creations. So you'll get a tour of noms past and present... but let's start with the most recent nom and work our way back. I suppose if we're getting technical the last thing I ate was a Peanut Butter Banana Cookie which Liv from PoorCollegeVegan baked using a recipe from The Joy of Vegan Baking. They are so tasty! Before that we went to Saffron Patch, a local Indian restaurant. It was my 2nd time ever experiencing Indian cuisine and I was much more pleased this time around. Liv got her favorite dish, Chana Masala, and I got the Vegetable Korma in a cashew cream sauce. Both were served with saffron rice and we also got an order of bread (not naan) that was made with potatoes and green peas... it was very interesting and very delicious, all of it! I'm excited about my leftovers... :) Now let's look at some pics. My lunch today was what I like to call a Lazy Man's BLT. Since I don't have (and don't particularly *like*) tempeh bacon or Smart Bacon - I used to LOVE Morningstar's fake bacon... but it's so not vegan - I used soy bacon bits on this sammie. Tee hee. It was good. 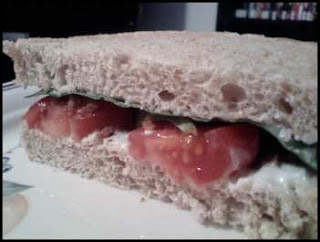 Mmm... back in my omnivorous days I used to *love* me some crab rangoon. Love, love, love. I finally tracked down some vegan wonton wrappers at a local Asian grocery (which are so much fun, BTW) and loosely followed Chow Vegan's recipe. I used Tofutti CC and scallions with a dab of wasabi as the filling. These were pretty damned good. But didn't taste quite like crab rangoon - perhaps I'll add something seafood-y in them next time. Still damn good, though. 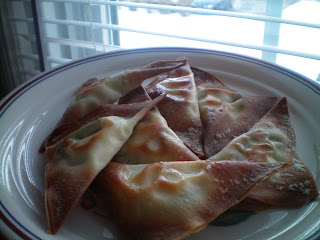 Remember that broccoli salad that made me all warm in my giblets?? Well, folks. I did make more. Inhaled more. (And psst... I have another bunch of broccoli and unopened jar of Veganaise waiting to be transformed into a THIRD batch... but shhh, don't tell anyone). I shall include the recipe which my mother found. It. Is. Bomb.
Vegan Broccoli Salad 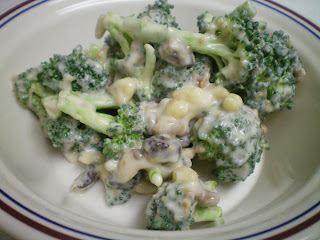 Here is a pic of my very 1st tofu scramble! As you can see, I had no turmeric to make it that delightful fake eggy color. But nonetheless it was perdy good for my 1st try. Mushrooms, onions, sundried tomatoes, red potatoes, garlic, and lots of spinach. I am so craving a scramble right now... 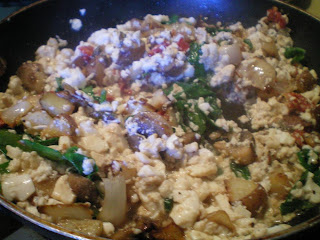 Below is what I usually stick with on cold mornings: a hot bowl of oatmeal. Sometimes I sprinkle tasty shit on top, like walnuts. That's just how I do. 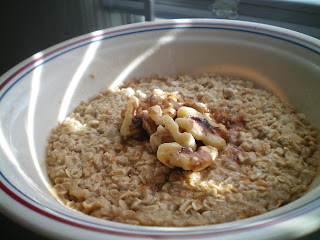 OMFG. Liv made me supper the other night... I tried quinoa for the 1st time (WTF kind of vegan am I?!), and she used red. She spiced them shits up with some cinnamon, saffron, and other 'licious spices. On top of the quinoa are some tofu triangles in a lime-soysauce-liquid smoke-agave sauce... SO good. And of course a great ol' heaping mound of lime-y kale and some sauteed, black peppery, orgasmic baby bellas. I love when my Livvers cooks! 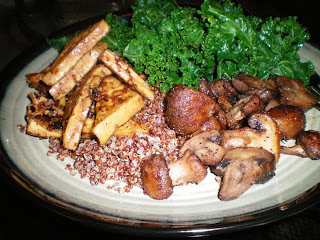 AND!! I found Road's End Organics' Shells & Chreese @ Mustard Seed Market (a health food store that has many vegan essentials and rare finds). This was... a little bland, I would say. Perhaps I had been hyping up the taste of the old Kraft M&C. But it was still pretty good. I have a box of the alfredo style M&C in my cupboard still and we'll see how that one turns out. 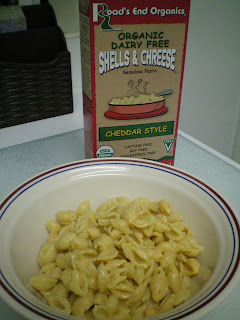 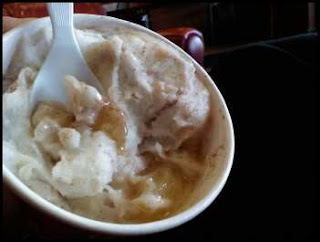