Good neeeeeeeeews... I found my camera cord! I'm so thrilled about it. I went digging in my couch to find a missing playing card and I found it, the camera cord, and the remote to my TV. :D Awesome! SO. I can now post these crappy pictures of food which I took when my camera was dying & wouldn't focus on a damn thing. Ha. I'll take some better pics of my food soon, I promise. More good news: my friend Lindsay has decided to take the vegan plunge! She tried it before, but now has a renewed ambition to embrace a cruelty-free lifestyle! Since becoming vegan myself, I've seen 3 of my friends make the transition now. *grins from ear to ear* I love that feeling! 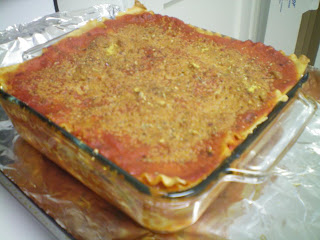 Here's the lasagna I made, after I took it out of the oven. The Parma! kind of turned an icky brown, but it was all good. Yum! 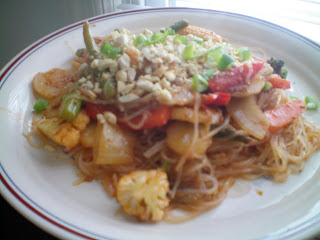 And this is homemade Pad Thai! I used a simmer sauce packet. It was all right... nothing super-special. The best Pad Thai I've had is from... Pad Thai, a local restaurant. It's so fuckin' good. 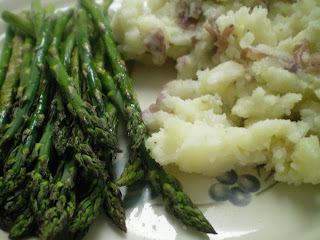 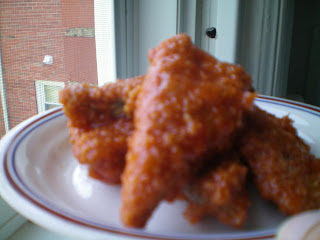 And here's a crappy pic of Katie's *DELICIOUS* Tempeh Wingz! I've made these twice now, and they don't disappoint. I need to get some panko for next time - I think they won't get soggy as quickly as when I use regular old breadcrumbs. SO good! This is my favorite way to eat tempeh.