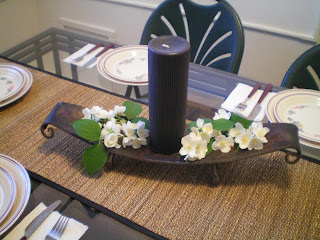 Well, would you look at that table? Gorgeous, huh? That would be the set-up for the dinner I hosted for my dads! It was a week before Father's Day, but we'll get to the reasons behind that in a bit... It was a special occasion, indeed. My bio-dad hadn't seen my apartment, yet, so there were 2 motives involved. Here's the menu I had made:
I'm such a recipe thief, aren't I? 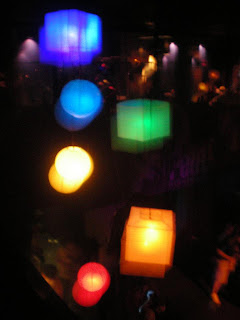 For Father's Day Weekend proper, I was in Columbus for PRIDE!! :D It was my 1st Pride experience and I had a frigging blast. Here are a few photos... 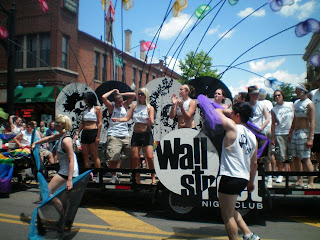 The Wall Street Nightclub was hopping the night before... 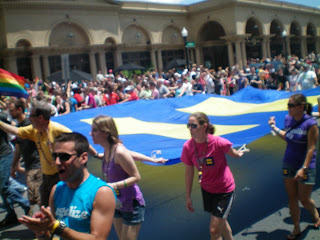 The Human Rights Campaign was there w/ its huge banner stretching across the street. :) 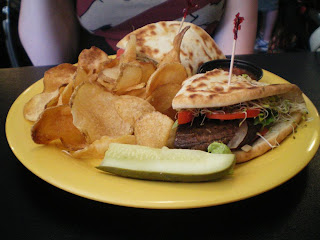 While there were floats throwing boxes of those new HUGE Cheetos to the crowd , fellow vegan bestie, Sarah, and I worked up an appetite & decided to find some food we could eat. We landed at Betty's (I have pics posted from Betty's in a previous post!). She got a huge portabello flatbread sammich w/ homemade chips. 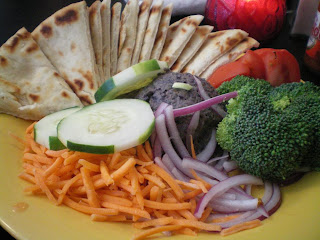 I got the Black Bean Hummus appetizer plate w/ toasted pita and a bunch'o'veggies. This was a lot of food... and it was ridiculously tasty. I'm usually not a big fan of black beans, but I took a chance and it worked out. I would for sure order this again! 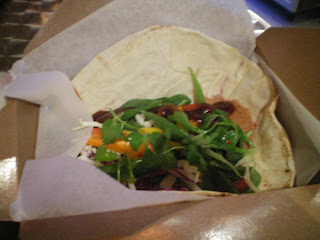 For dinner that night we ended up at Phat Wraps, a new tiny grill that gives you your choice of protein (steak, chicken, or "veggie" which were slices of ham-like faux meat) and lets you top it with the veggies and sauce of your choice. Sarah & I both overdid it on the only vegan sauce they had, a spicy Thai chili dressing, and burned our tongues. But otherwise, it was a nice meal. All of the veggies were locally grown and, I believe, organic. They also sold cookies from Columbus' vegan bakery, Pattycake! 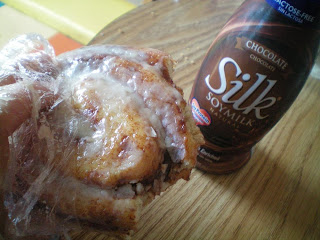 Mmm, how long has it been since I had a sticky bun?! Far too long, I assure you. The next morning, on our way out, we actually stopped at Pattycake and got some sugary breakfast sweets. :P This was so deliciously sweet, it gave me a tummyache on the ride home. It was so farkin' tasty... 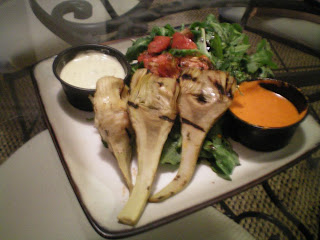 Well, that concludes my Pride trip. Here we have some take-out from VegiTerranean, the only Akron vegan restaurant. (LOVE) Liv's fiance plated this for us while we assembled her wedding invites. That white sauce is a lemon-garlic-aioli, I believe, and it is fucking BOMB. 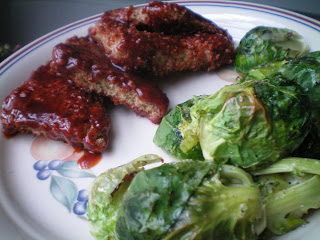 Did I forget to mention that mid-June was my Veganniversary?! Well, it was, and I couldn't be more satisfied and proud of myself! And what did I do for my accomplishment? I tried brussel sprouts again... and *liked* them. They still taste a bit bitter to me, but if I roast them long enough and use plenty of EB, they are actually quite tasty. Thank goodness I gave them another chance. :) 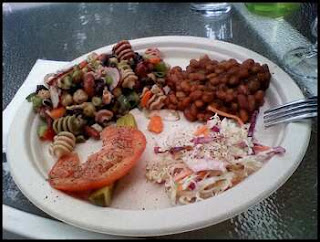 In other summer news: the 6th was my birthday. I'm 23 and feel only slightly more mature. :P My family got together for the 4th and we celebrated my b-day along w/ America's. Here is a plate of vegan food my mom & I made! She made this AMAZING bean-pasta-veggie salad that still makes me salivate to think about... and she even veganized the baked beans! The carnivores didn't even notice... I made some cole slaw which sits nicely next to a pickle and fresh 'mater. My wonderful mama also served a big tub of authentic garlicky hummus w/ pita bread. Afterward, she heated up a vegan cherry pie, but I was much too stuffed to eat a whole slice! 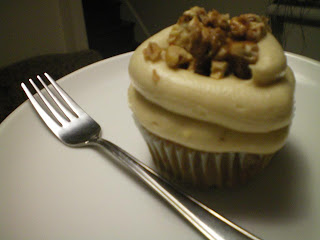 Liv & Justin were so incredible to my on my birthday... they cooked a big meal of veggie & tofu lo mein w/ a salad dressed in a homemade ginger dressing... NOM!! And Liv had let me pick whatever cupcake I wanted out of VCTOTW & I chose the Maple Cupcakes! I actually finished my last one today... these are so freaking incredible...! This was a birthday dinner I won't soon forget. :)