Yesterday was a day of productivity (... today? Not so much.) I ran a bunch of errands, including visiting two different Asian markets. I did this mostly because I was hoping to find some interesting mock meats (like how Chow Vegan has posted!), but neither had anything beyond tofu. :( The second market did, however, have a lot of prepared foods. Upon asking the woman who worked there about any vegan options, she recommended the vegetable medley... 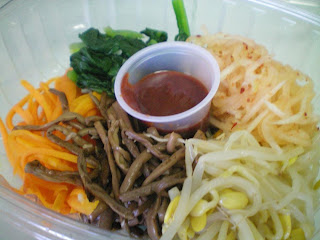 Clockwise from top: steamed spinach, daikon (I believe) radish w/ chili flakes, soy bean sprouts, an interesting vegetable she called "fern" (um...), and carrot with a barbecue-like dipping sauce. I was a little weirded out by the textures, so I didn't finish this... 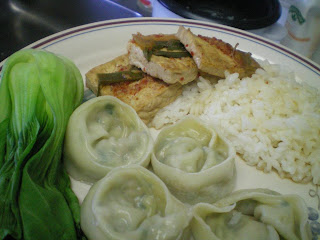 But the seasoned tofu she also recommended was pretty tasty! I steamed some baby bok choy and some vegetable dumplings as well. The dumplings were the very best part of this meal. :) 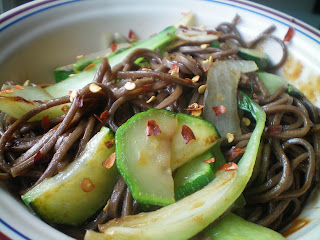 I must have still been jonesing for an Asian meal this morning (by morning I mean 11:30am -gotta love Sundays!), so I whipped up this tasty soba dish. Boiled the noodles and then stir fried some zucchini, baby bok choy, and onions in sesame oil before adding the noodles back to the pan and covering it in a hoisin-plum-ginger sauce. Yum! 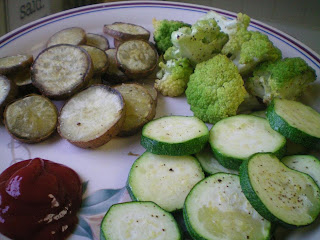 I love huge plates of roasted vegetables. It's such a comfort, especially when carbo-licious potatoes are involved. ;) And when I found a white sweet potato in the grocery store, I jumped on the opportunity to try it - they taste just like their orange counterparts, but I find they're much easier to roast in a jiffy b/c of their shape. Also pictured is broccoflower - so freakin' good when roasted! 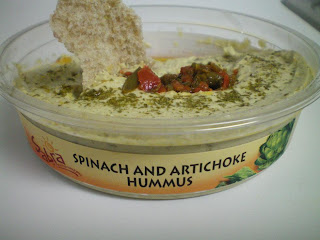 Sabra's newest hummus addition - Spinach and Artichoke. I was very let down by this flavor... I believe my hummus tastes have begun really to favor the more authentic texture/simplicity varieties. Sabra's just too thick. Having said that - I am VERY much excited for Tribe's new Pizza Hummus. But the stores near me haven't started carrying it yet... to be continued!