Happy belated Thanksgiving, everyone. :) I hope yours was as lovely and as vegan as mine! This year my mom and stepdad went to KC again, so I hosted T-give at my place again for my dad, his girlfriend, and my li'l bro. Which means... I was in charge of the menu! Bwah ha ha. My first vegan Thanksgiving was a success, but I wanted to improve upon the nom selection and my preparation approach (I was scrambling around like a madwoman when my guests arrived... no fun). This year I actually sat down and created a schedule of the 2 hours before the fam arrived, detailing exactly what I had to do and when (OCD much?) so that I would actually have time to converse and relax before the meal. Smart cookie, huh? Well, it worked! And I'm never going to wing it again with any of my entertaining ventures - nerdy schedules all the way! Anywho, onto the food... 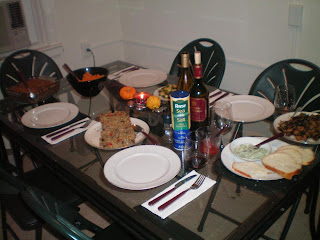 Yes, those are two bottles of wine you see. 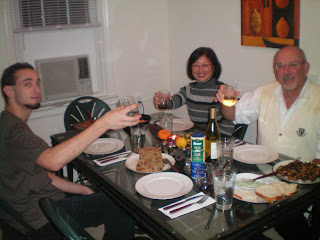 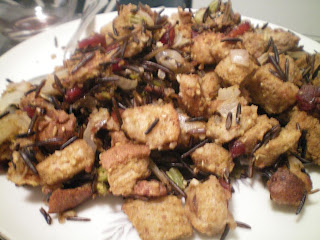 Cranberry Wild Rice Stuffing (sans pears). This had the potential to be really scrumptious, except after I boiled the shit out of the wild rice and then baked it... they were crunchy and practically inedible. I would suggest that if you are to attempt this recipe, boil the rice as instructed, but just add it into the post-baked final product. (Oh, and I know these pics are terrible, but we were hungry!) 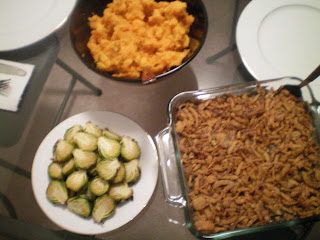 Mashed sweet potatoes, roasted dijon brussel sprouts, and Isa's Green Bean Mushroom Casserole. This stuff is the SHIZZ and was a real hit. I don't think I'd ever had a green bean casserole before... and that suspicion was verified when I learned my mother didn't know what a can of fried onions was. I'll definitely be making this again! :) 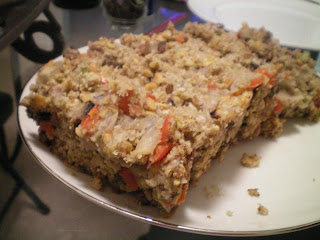 Mmm... Lentil loaf! This recipe is from some vegetarian cookbook that Olivia's mother owns (therefore I don't feel comfortable posting the recipe). This is the same recipe that the mother of the bride used for lentil burgers for Liv's wedding! This is especially tasty with a bit of ketchup on top. ;) Classy, huh? 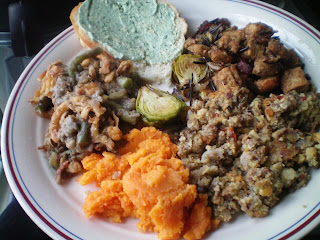 Here's a shot of mah plate of leftovers (hence the sunshine). That green schtuff is a spinach dip I whipped up by combining a box of silken tofu and a packet of organic spinach dip seasoning. And everyone was surprised it was made out of tofu, which is like a bad word to omnis. Yay for no effort! 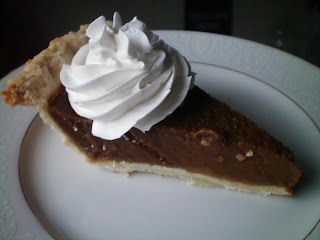 Aaand it wouldn't be Thanksgiving w/o pumpkin pie. Which I made, not from scratch. I used some can of organic pumpkin pie mix and it was brown instead of bright orange... I think it had molasses or something in it. It was a very different taste, but still yummy. And that's Soyatoo's Soy Whip on top (I purchased it and THEN realized it has palm kernel oil in it... fail). 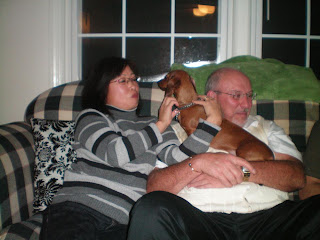 Happy family. :) My mom is hosting X-mas Eve again this year - I'll keep this blog updated on what sneaky vegan creations we can serve my exclusively omnivorous fam. Yay, holidays!